Born in 1981. A Dominican. He was ordained in 2014. His biggest interest is dogmatic theology, especially connected with the Second Vatican Council (Romano Guardini, Joseph Ratzinger, Yves Congar, Henri de Lubac).

He graduated from the Salesian Music School in Lutomiersk near Lodz where he studied the organs (1996-2000). From 2002 to 2005 he studied choir conducting at the Frederick Chopin Academy of Music in Warsaw (now: the Chopin University of Music). He’s an author of liturgical, sacred and theatre music. He composed the music to “Papal stories” (the ITP theatre, Lublin) or „Antigone” (students’ theatre at the John Paul II Catholic University of Lublin, Lublin).

What he finds absorbing in music is Johann Sebastian Bach’s work and harmony in a broad sense. He’s a friend and an associate of the Dominican Liturgical Center, and a lecturer at the Cantorial School. 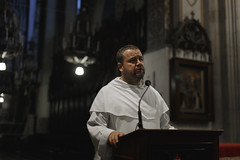